Jan Marsalek was apparently an undercover agent for secret services - and who knew about it?
In Libya, Marsalek has an army of 15,000 mercenaries under arms! ...
Read more below ...

Monday 02. November 2020 corona pandemic seems to push the Wirecard scandal into the background - that makes the politicians happy because you don't have to answer any embarrassing questions , but the press is not sleeping, we are investigating and following up because this scandal must NOT go unpunished. The responsible politicians must at least take their hats. ISAAN NEWS, independently and apolitically reports on!


The evidence of Jan Marsalek's secret service connections is increasing. According to the German judiciary, the ex-Wirecard board member was on the run probably not only a contact for the Austrian constitution protection, but had excellent relations with the CIA, BND and the German constitution protection.
As in the film, there have been undercover meetings, for years there has been a fair celebration in the Million Villa on the Starnbergersee Guild and celebrities worked to launder money
Former Wirecard board member Jan Marsalek (40) may have been an undercover agent for the Austrian intelligence service. The Federal Public Prosecutor "has evidence that that the Austrian citizen Jan Marsalek from an employee of the Austrian Federal Office for the Protection of the Constitution and Terrorism (BVT) as Confidant was led ", it said in the answer of the Federal Ministry of Justice in Berlin to a request from the Bundestag member Fabio De Masi (40, Die Linke). Whether and how Marsalek works with the BND and the CIA cannot be confirmed for reasons of secrecy
In the answer, which is also available to the German Press Agency, the ministry adds: "So far there have been no sufficient factual indications for this show that the contacts between Jan Marsalek and BVT in the room constitute an act of secret service agent activity directed against the Federal Republic of Germany or any other criminal offense falling within the jurisdiction of the Attorney General to prosecute. "
According to "SZ", the Austrian Ministry of the Interior, to which the BVT is subordinate, did not want to comment "for legal reasons". An undercover agent in a DAX company to place it would be an affront and could strain German-Austrian relations. Left MP De Masi demanded in the "SZ": "The Chancellor should Pick up the phone and ask Sebastian Kurz what the Austrians are up to here. "
The native Austrian left in mid-June, a few days before the payment service provider admitted air bookings of more than 1.9 billion euros on the balance sheet had to. Since then Marsalek has been on the run from the German authorities, while more and more of his illusionary and financial tricks and entanglements in the secret service milieu come to light. According to media reports, the manager is now in the vicinity of Moscow under the care of the Russian secret service. Operated in Russia Wirecard is also a subsidiary .

Marsalek and the Soeldner Army - well trained by the Russian military! 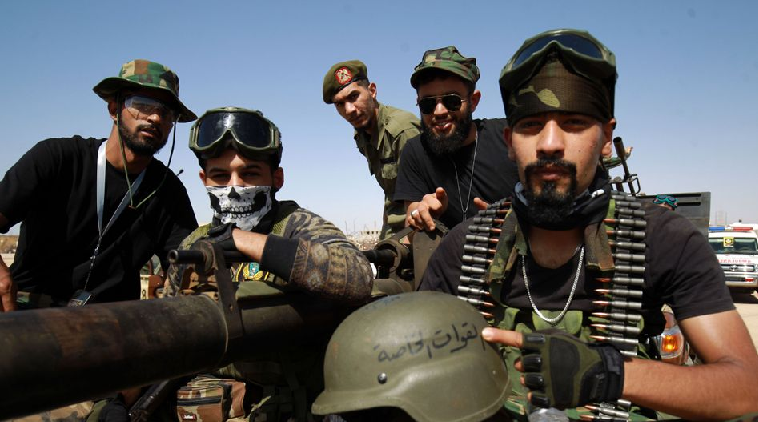 In addition to his main job of inflating the balance sheet of the payment service provider Wirecard with the help of dubious third-party companies, the long-standing director Jan Marsalek (40) apparently still time for private escapades like an agent thriller. The "Financial Times" writes of a "double life", whose journalists were the first on Had doubted the business conduct of the ultimately imploded payment service provider. New revelations in Friday's report include Marsalek himself wanted to interfere extensively in the Libyan civil war That he is working with terrorists, IS as an ally?
what is our policy involved in?
Several business partners, including high officials and ex-diplomats from Austria, complained to the newspaper that Marsalek had it over the Austrian-Russian Friendship society lured under the pretext of a project for the economic reconstruction of the North African country. There was also state funding for this promised from Vienna. It turned out, however, that the Wirecard manager at the time clung to fantasies of a geopolitical game and did not care much for them Civil society is interested.
Quoted from the minutes of a meeting in February 2018, Marsalek had repeatedly insisted on putting together a 15,000-man police force from ex-militias and to close Libya's southern border. This troop can be used as pounds in negotiations with the central government, the Middle Eastern powers and the EU. Those involved were shocked that the manager apparently recorded live recordings of brutal fights during the talks in his pretty Munich residence have dedicated.
While the report suggests links to Russian intelligence operations, it makes the motives of Marsalek's actions seem even more unfathomable than before. A private investment claimed by Marsalek in a cement factory in Libya also appears doubtful, although Marsalek granted a debt relief for it in 2017 I received 20 million euros from the Vienna government. The manager made an impression with his explosive activities and his social position as Some of the informants speculate that school leavers without a high school diploma want to raise. "The only thing he liked more than to know secrets was to tell about them", said one.

The devil's loose in Wirecard's shadow realm. The police have now confiscated works of art and furniture in a villa in Munich.
he Wirecard scandal, in particular the mad hustle and bustle of the fleeting former board member Jan Marsalek, is drawing wide circles and is now tearing one after the other into the abyss, which recently felt on the safe side in its wake. This is what happened this week to a businessman from Munich n summer belonged to Marsalek's select circle of confidants, to be precise until the mild June day on which the Wirecard manager went into hiding; til today he is wanted with an international arrest warrant. He had apparently not revealed anything to his friend, the former TUI manager V., about the departure.
Suddenly the friend was no longer sitting on a bulging sack of money by Marsalek's grace, but on a time bomb that went off: On Tuesday the man wandered into custody, his fortune is frozen according to information in this newspaper, the Marsalek mansion, in which businessman V. resided, was thoroughly emptied by the police. Now many start-up companies, which have been supplied with capital from there, fear for their future, specifically for the millions, that they had been promised. A victim of the development is the Getnow food delivery service, one of the young companies from Marsalek's orbit.
But one after the other. Let's start with the villa in Muenchen-Bogenhausen. This is where Jan Marsalek held court for years, and here he tucked away with dubious guests Establishment of a volunteer group in Libya, where he networked young founders with wealthy investors. Marsalek called the villa his "home", the official tenant of the splendid property, however, was businessman V. After Marsalek went underground, he suddenly found himself left alone with a monthly rent of just under 50,000 euros. V. could not find the money.

Who is behind the "Getnow Holding" ?


Worse still: the flow of money from his holding company called "IMS Capital" dried up in one fell swoop. On October 22nd, V. had to file for bankruptcy register the IMS company, which the investigators believe was fed by Marsalek's dubious sources. This in turn affects quite a few start-ups sensitive. IMS held shares in around 20 young companies, including the Munich online supermarket Getnow, which also had to file for bankruptcy last week. "If a major investor suddenly breaks away, it's difficult," says one partner. The payments have not been made for a few months, a new one Investor could not be found in a hurry - also because of the many question marks that remain.
Because what about the other major investor that V. and Marsalek brokered? Who is behind the "Getnow Holding" based on the Isle of Man, whose ominoese parent company is also part of Marsalek's shadowy kingdom?
The Munich public prosecutor's office is also asking itself the many questions. She hopes that businessman V. will explain where Marsalek's fortune came from and how he did pushed it back and forth across the globe. On Tuesday she arrested V. The accusation: He is said to have quickly siphoned off 2.5 million euros from IMS before the bankruptcy. However, the public prosecutor points out that the arrest warrant was suspended against appropriate conditions. V. can "after their fulfillment Leave pre-trial detention at any time ". In addition, the investigations against V." have nothing to do with the Wirecard investigation ".
This is the Marsalek scam. One never has anything to do with the other directly, but indirectly it does. Marsalek had nothing directly with the villa and IMS Capital do, indirectly, very much. Marsalek was never directly involved in the investments, he still often sat at the table - in whatever role always; whether as a Wirecard manager, as a private individual, as a broker or even as an undercover agent for the Austrian intelligence service. That classifies him as such Federal Ministry of Justice, as it now became known.
Whether V. will be released in the next few days probably depends on the amount of the deposit. His private property has been arrested, but he doesn't have any Access more. Two business partners of IMS have made corresponding claims, accounts and holdings of Manager V. have been frozen. And from the According to eyewitnesses, the Marsalek Villa on Prinzregentenstrasse has cleared out quite a few works of art.

Many questions remain open. Marsalek was definitely part of the secret services and the CIA, because without their help he would never have been able to move such large amounts of money. It is also certain that Marsalek has been working with the Russians for many years, Isaan News knows from confidential sources that modern technology is based on blockchain technology designed software, with which he ran his digital business, comes from Russian software laboratories.
Marsalek is certainly a brilliant strategist, but he is not a software expert nor does he have much knowledge about the internet and the digital financial world.
It is strong to assume that Marsalek still has the strings in hand, because there are perhaps hundreds of bogus companies that he owns or over around the world which he has powers.
Even the Munich public prosecutor's office plays a role. They have been investigating Marsalek for over 10 years and have kept investigations without comment. Even that cannot be understood, or is it? Marsalek has a solid system of supporters, all with millions he bought has available.
Recently a confidante and alleged witness was released again, against millions of bail, one wonders where Mr. Ley got this money from? Many questions remain open and Isaan News continues to investigate.


Can a candidate for Chancellor be so "inept" or has he knowingly violated his own orders?


More Isaan News - More Isaan News - on BaFin and Olaf Scholz, Jan Marsalek and the Criminal Club
The Bafin Zocker - Insider Trading - The Criminal Club continues and the Politicsis in between
Jan send - From Russia with Love
Under Investigation
BaFin und der Wirecard Betrug
Olaf Scholz am 17.7.2020 mitten drin
Scholz Knew about the entire WireCard since February2019-but Jan Marsalek was the Darling of the Nation and everybody needed to protect his millions!
Scholz wusste noch viel mehr